It’s kind of fun when people call this jet Japanese. It has the name of the Japanese company, but actually, the plane is produced in North Carolina, United States. On the 3rd of December, 2003 the world of business jets was astonished by a new model of a light private jet presented by Honda Company. The new plane appeared to be really great in terms of fuel economy, flight comfort, efficiency, and range. Nearly any competitor couldn’t offer the same options as HondaJet HA-420. But the time flies and the jet started getting older in terms of technologies. Literally, hundreds of first-generation jets were sold, so in 2018 Honda decided to reconstruct the model and produced HondaJet Elite. It’s an absolutely new version of the jet that is said to be even more advantageous than its ancestor.

The HondaJet Elite is now selling like crazy. Companies and flight operators all over the world are absolutely ready to pay $5.25 million to have it in their fleet. The model is extremely technological, it got even quieter and faster than the previous generation, it got more comfortable to fly and reduced fuel consumption. And today we are going to have a thorough look at the new generation HondaJet Elite. 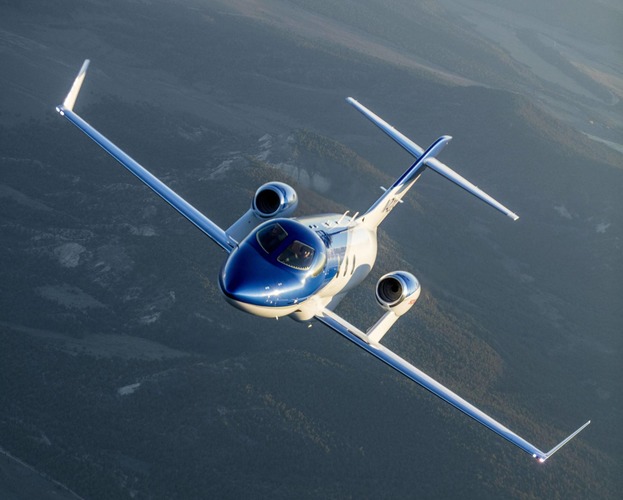 Quick overview of the model

Honda is set to sell at least 50 jets per year, so soon we’ll have a lot of these planes rushing there and back in the nearest future. To understand why companies love this plane, we’ll need to look at basic details and specs. Well, the HondaJet Elite doesn’t differ much technically from the first model of the company. But it offers some improvements that need to be considered. You may also note that Honda didn’t stop producing HA-420 models and even provided an APMG improvement package to refit the old jets and give them some advantages of the Elite version.

So, HondaJet Elite shows the takeoff roll at 3491 feet or 1064 meters and this nearly makes it the leader in the class. The range of the new model is increased to be 1437 miles or 2661 km. They installed an auxiliary fuel tank for this and also completed some aerodynamic improvements. This also made the design sleek and fresh making the HondaJet Elite one of the most desired private jets for plane spotters all over the world.

The Honda Company engineers changed the shape of engine inlets, though the engines are still the same. This helped them reduce the noise and vibration in the cabin significantly. They equipped the flight deck with a Garmin-3000 system that can calculate takeoff and landing, predict the optimal attack angle, reduce the fuel consumption and help the pilots plan the route better.

HondaJet Elite cruises at 390 knots or 729 km/h while burning around 260 kg of fuel per 1 hour of flight which is actually much better than any predictions about the plane.

Well, the plane got silent, it doesn’t vibrate much even during takeoffs, it’s absolutely comfortable and it can take you to solid distances for such a small aircraft. And we love the way it looks, this is also an important thing for today’s private jets.

HondaJet Elite is equipped with two GE Honda HF120-H1A engines providing 2050 pounds of thrust each. In American certification, it shows 103 gallons per hour fuel consumption which is 10 to 15% less than for the majority of compact private jets of the class.

How does it feel inside?

As of now, there are over 65 HondaJet Elite planes in operation. They are mainly used for private and family purposes as well as for business flights all over the world. Honda gets certification in all major countries that are the market for the company. People and companies are gladly buying the jet, and it’s not a surprise.

Once you are on board, you see the elite interior with lots of natural materials. The seats became even more comfortable and safe. Honda offers a wider cabin than nearly all competitors in the class, and this makes the flights much more comfortable for passengers. External luggage volume is 66 cubic feet which isn’t that bad if you look at competitors like Cessna Citation M2.

The flight deck hasn’t changed much, but it became more comfortable and up-to-date. The jet allows a crew of 2 pilots, though it is one-pilot certified. The seats are actually the same as in the previous model, but the ergonomics of the pilot’s place has changed a little. More technologies and more interactive things are available for better controlling the flight.

There is a fully private lavatory which is a rare thing in the class. Four main seats are very comfortable, and there are two stowable tables. Three windows on each side are big enough to let the passengers observe the places they are approaching. They also let a lot of light inside making the HondaJet Elite’s cabin a cozier place to travel. Passengers will seat face to face with each other, and that gives a lot of legroom as for a tiny jet like Honda. There is an optional side-facing seat to bring a fifth passenger if needed.

If you come into the lavatory, you’ll be amazed by the amount of light in it. Just raise your eyes to the ceiling to see two skylights in it. You aren’t likely to find another aircraft of this size to have such an option.

The cabin is controlled by your smartphone. For example, you can control audio, lighting, and cabin temperature in a special app. There are special window shades that can also be controlled with a smartphone, so sleeping during a flight will never be a problem for passengers.

The number of innovations is really hard to describe. Even if you have a lot of experience using private jets, you’ll need some time to get used to the luxury design of the HondaJet Elite cabin.

Problems and disadvantages of HondaJet Elite

The thing is that there have not been any big problems with HondaJet Elite so far. Owners and operators have registered three cases of unsuccessful takeoffs when pilots decided to stop takeoff due to some reasons and get back to the runway. All cases weren’t serious, so the planes continued their journeys after technical checks.

In all history of HondaJet, there were two main accidents that may have happened due to the construction. The first one was in 2005 when the jet couldn’t stop on the runway after landing and was caught by special systems near the airport fence in Midway Airport in Chicago. After takeoff in Philadelphia, the jet got into a thunderstorm and that is believed to be the reason for some technical problems.

The second accident was in 2019 and it also involved the first HondaJet model. Before landing at Charleston International Airport the HondaJet pilot noticed some warning signs on one of the screens. He decided to fly over the traffic control tower and the airport workers told the pilot that the nose landing gear didn’t look right. Finally, the pilot asked for an emergency landing with the front landing gear folded. The plane was severely damaged with a hole in its hull, but no one was injured.

The HondaJet planes haven’t brought any person to death or injury for nearly 20 years of flying, and that’s impressive. HondaJet Elite is claimed to be one of the safest private jets in the world.

Plans for new versions and modifications

HondaJet constantly works to produce new technologies for compact aircraft. They are going to present a modernized version of HondaJet Elite and then they will make small changes to maintain its competitive power. But major changes aren’t going to happen until its competitors present new models of small private jets that will be much better than HondaJet. And we doubt it will happen within the next few years.