Megan Rapinoe is probably the best winger in women's soccer. She has huge experience in playing on different levels and she can still be the main player in her team despite her age. Megan was born in 1985 and many players of her age have already retired from big soccer finding their place in coach work or in some other spheres. Megan still plays and even captains her team as well as the USA national women's soccer team. She is the brightest star and we decided to look at her life to let you know more about her.

USA soccer has never seen a person so calm as Megan Rapinoe. Her childhood will explain that. To become a top-rated player, she had to go through impossible struggles. We’ll tell you more about her life, revenues, and sports career. 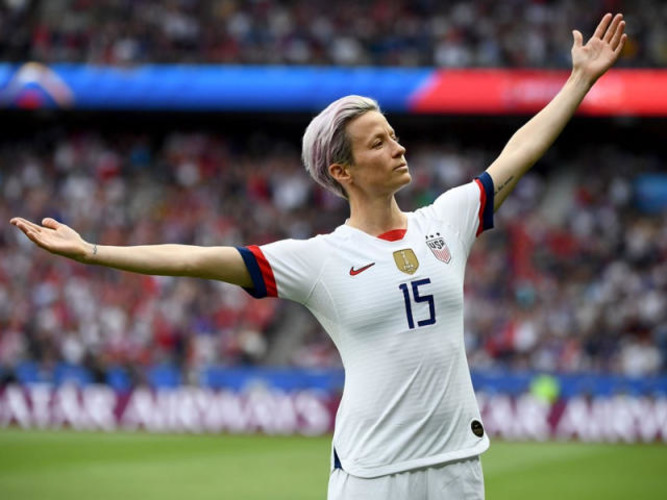 Does Megan Rapinoe have a husband?

That’s not a secret that Megan is a lesbian. She publicly came out in 2012 in Out magazine telling the readers about her 3-year-long relationship with an Australian soccer player, Sarah Walsh. After one year they broke up. Then she was engaged with a musician, Sera Cahoone, but in 2017 we got to know that their wedding plans were on hold. At that time Megan started dating Sue Bird, a basketball player of Seattle Storm.

In 2018 Sue Bird and Megan Rapino became the first same-sex couple to appear on The Body Issue cover. The magazine is powered by ESPN, so it’s mainly centered on sportspeople. In 2020 Megan and Sue announced their engagement.

Megan Rapinoe has never tried to hide her relationships with her girlfriends from the public. She’s the dream of a modern reporter because during her interviews Megan tells journalists really everything that happens in her private life. She is far from being a shy girl, so it’s the reporter who blushed all the time.

The icon soccer player often says that her older brother was the one to thank for her career. Aged 3, she saw him playing soccer with other boys and she started training, too. She idolized her older brother, but unfortunately, he was involved in drug issues aged 15 and started his long journey in and out of jails all over the country. After Megan showed her first big success in soccer, her brother Brian decided to end his criminal life, he was very disappointed that he couldn’t come and support his sister in the stadium.

Megan’s parents have always supported her, but they were bringing up 7 kids, so it was quite difficult to spend a lot of time with one of them. In her interviews, Megan often says that her tough but happy childhood was the key to her success in sport. She has warm relationships with her siblings and parents. But she also admits that soccer was the main option to go away from drug abuses that were common in rural California at that time.

Megan’s father was a football coach, so it was easy for her to get in teams and have loads of playtime on the pitch. She was first coached by another person in her high school.

How much does Megan earn?

Rapinoe started her professional career in 2009 being 24 years old. That’s quite an old age for a starter, but she showed great results in Women’s Professional Soccer and was welcomed by many professional teams. In 2011 she signed with Sydney FC, the Australian W-League team. In 2013 Megan relocated to France to play for Olympique Lyonnais. And that was the peak of her career as European football is one the most competitive sports you can find on this planet. In 2014 Rapinoe signed with Seattle Reign FC and has been playing for the team until now.

Megan Rapinoe is said to earn up to $170 000 per year. That’s three times more than the average salary in US women's soccer. And this is probably the highest salary throughout all her career. Women soccer players don’t tend to make much money from their contracts, but they certainly have some additional income sources.

Rapinoe’s net worth is known to be around $3 million. Her life is not poor at all. But it’s hard to compare with top football players in Europe where they earn ten times more per month than Megan earns per year. Anyway, Megan Rapinoe has never been seen telling reporters anything bad about salaries in women's soccer. She’s always positive and seems to be OK with everything that is going on around her.

Megan Rapinoe was spotted in many ads on TV that have reportedly made her more money than her professional career. She took part in ad campaigns for Subway, New York Times, Smirnoff, Hulu, Team USA Shop, Volkswagen, Nike, Chevrolet, Kumho Tires, and many other brands. Her fame as a soccer player has brought her success in TV advertisements.

Money has never been the main goal in her life, but she certainly knows how to make it. Megan Rapinoe’s Instagram account has 2.2 million followers and that means she can sell ads there for huge money. She can earn up to $1 million a year as an influencer and we see that she uses this way to earn more.

When will Megan Rapinoe retire?

People start asking this question more often right now because Megan is in her mid-thirties now. Usually, women soccer players retire when they are 30 to 32, but Rapinoe keeps playing successfully. In 2019 Megan helped the US national team to win their second consecutive World Cup and since then she decided to concentrate on her club games. She says that playing for the national team takes a lot of power and time.

But Rapinoe has never given a hint that she was going to retire from professional soccer. She’s still in great shape and no one actually expects her retirement. And still, everything can happen.

What else do we know about Megan Rapinoe?

Her pink hairstyle is always a good thing for commentators because they can easily say who has the ball and who scores the goal without even looking at the player’s number on her T-shirt.

Megan says that there were no games in her career that made her nervous. She admits that there were a lot of wins and losses, but she always says that once you miss the chance, that’s it. You won’t get the situation back, so there is no need to worry about it. Just make efforts to perform better next time. And we love that philosophy.

Megan also understands that soccer wins and losses are vitally important for her at this moment. But in the sense of all life, it’s just some ordinary thing you have as your experience.

She admits that she realized her power in 2016 or 2017 being a veteran already. And since then, her matches have been even more successful and spectacular. But she still says that professional sport is like a Groundhog Day for her: she’s been doing basically the same things in her life for 10 years. Being a team leader does put some more responsibility on her shoulders. And she copes with it easily being a great role model for all young players in Seattle Reign FC.

During recent years Megan has taken part in many organizations that fight for racial justice and LGBT rights. She’s known to be the supporter of the equity push movement in sport to level the rights and conditions for men and women.

The important thing that she appreciates in people is when they tell her the truth. You can really grow and get better when you get fair feedback for what you do. Megan is a captain in her team and she has found a way for each player to motivate them and to get them at a better level each game. That’s the reason why veteran players should be welcomed at any team. You just have to see how Seattle Reign FC plays when Rapinoe’s on the pitch.