When it comes to ocean cruises, Royal Caribbean is the company to think about. It currently has 24 ships in the fleet and it keeps getting more. Today we want to tell you about one of the newest ships that became the world’s most popular news recently. The Quantum Ultra class ship, called Odyssey Of The Seas was to be launched in 2020. But due to a huge crisis in the cruise industry, this didn’t happen. In 2021 there were numerous delays and hesitations with launching the ship, but in Royal Caribbean, they say that they are determined to do it as fast as they can.

Today we’ll see what size of the ship is and what kinds of entertainment it has aboard. We’ll also look inside the cruise industry and predict whether the Odyssey of the Seas will be successful. It’s really hard to describe a luxurious ship if you have never been on its decks. But we’ll try to do our best and show you what exactly the first guests of the huge cruise ship are going to have. 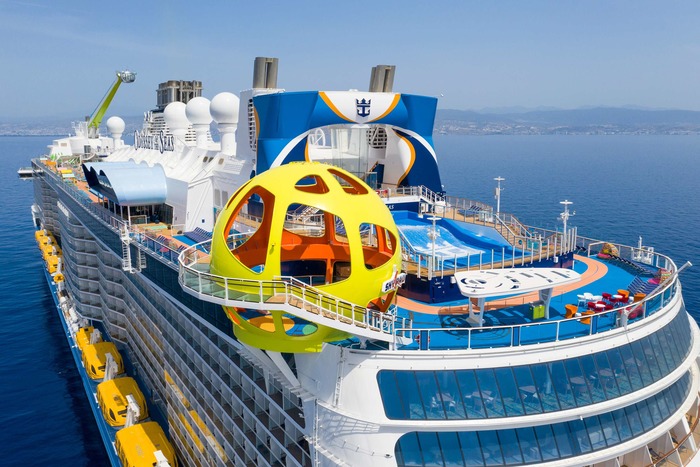 Building and launching an 1138-feet machine

There are several companies in the world that have facilities for building such monsters. The ship is really huge. It’s something like a 16-story building if you compare its height with something that you are familiar with. The length of more than 3 soccer pitches is incredible for a vessel. This is a marine hotel with thousands of rooms.

Meyer Werft has built the Odyssey Of The Seas and the shipyard needed something like 5 years for it. It costs around $1 billion to build such a machine, but Royal Caribbean knows how they will get their money back.

A gross tonnage of 169 000 tons is incredible. 14 decks are open to guests, the other 2 decks are for technical needs. There are 17 elevators available for guests, and some more for crew and loads. The ship is 135 feet wide. The Odyssey of the Seas can accommodate up to 5498 guests! You’ll be amazed when you know that it needs a 1550 crew.

And what’s even more incredible, the ship is ranked 20th among the largest cruise ships in the world. So, there are 20 ships that are bigger and even much bigger than the new Royal Caribbean vessel. But being the newest ship, the Odyssey of the Seas still draws a lot of attention.

The cruising speed of the ship is 22 knots or slightly more than 25 mph. It uses 4 bow thrusters with around 4700 horsepower each. The draft is 28 feet which isn’t that big for a ship like Odyssey of the Seas.

During its construction, there were two big fires that damaged the ship significantly. Those fires were registered in May 2020 and then in June 2020. And we believe, this was the major problem that caused a delay in launching this cruise ship on time.

What are you going to have onboard available when you buy the cruise ticket?

The most interesting question for those who are going to use Royal Caribbean services is what you actually get when you are on board. And the answer is going to take quite a lot of time.

You may know that nearly all cruise ships have all their entertainments on the upper deck. Here, at Odyssey of the Seas, you also get a big amount of wonderful spots on the upper deck, but the whole ship is stuffed with unbelievable entertainments that you will be glad to use. Part of them is free for everyone who managed to get on board, the other part is available for those clients only who bought more expensive tickets or who are ready to pay extra.

Let’s start with free entertainment that will make you go to the Royal Caribbean website and check the next cruise prices.

360-degree views from the North Star. This is a futuristic capsule that will raise you to 300 feet above the water so you can have a 360-degree view all around the ship. The North Star even holds the Guinness World Record for being the highest observation deck on a cruise ship.

Flowrider. If you have experience on Royal Caribbean cruise ships, you may have seen the FlowRider. Here, at Odyssey of the Seas, it’s made even more dramatic and advantageous for guests. This is basically a 40-foot-long surf simulator that will entertain you with no extra charge.

Ripcord by Ifly. The skydiving experience is available now for every guest of Odyssey of the Seas. There is a giant tube with big fans installed under it. Once you come inside the tube, the fans start blowing and you literally start flying in the tube. It will take some time to learn, but then you’ll feel like a real skydiver.

Bumper car arena. It’s now possible to drive some electric cars when being on a cruise ship. With a huge bumper car arena, you will find your favorite entertainment aboard the big ship. Kids will love this, too. The arena is part of a big zone called SeaPlex which is probably the largest ever indoor space on ships with entertainment for all ages.

The rock-climbing wall looks futuristic and is actually big fun for both adults and kids. You may have seen such attraction on other Royal Caribbean cruise ships, but Odyssey of the Seas will surprise you for sure.

SkyPad with VR glasses. This virtual attraction is the combination of active lifestyle and technologies. You put on some VR glasses and start your unforgettable experience while hanging on two ropes.

Solarium for adults only. This place is open for people over 18 years of age, and you can rest here leaving your kids in SeaPlex or in the stateroom. The area has lots of pools and many places to just relax. We would say it’s a must-have for any cruise ship in the world.

Plenty of places to eat. There are places that will charge you additional money unless you bought the most expensive ticket. But there are still dozens of places to eat that are free. Sorrento Pizza is the place where you can get Italian pizza at any time of day and night with no extra costs. El Loco Fresh will offer Mexican cuisine. The main dining room offers tasty dishes from all around the world at no extra charge. There are 14 places to eat, drink coffee, and other soft drinks. There are also 7 bars for some hotter drinks.

There are many more things to entertain you while you are on a cruise, but we believe you’ll need some surprises when onboard. So let’s move on.

There are 2105 suites and staterooms that are originally subdivided into four main categories: interior, ocean-view, staterooms with balcony, and staterooms with a virtual balcony. The virtual balcony room has a huge screen where you are supposed to see a window. This screen shows you real-time exterior views all day long and it created new feelings of space and comfort. The staterooms are really spacious and we would even say rich. They are quite comfortable for a family stay.

But you may want to pay more and get one of the suites. Probably the best suite on the ship is the two-bedroom Ultimate Family Suite, and there is only one room of the kind. There are also loft suites, large balcony suites, and other types of accommodation for people who are ready to overpay for their comfort during the cruise.

What are the plans for the ship?

Odyssey of the Seas was originally planned to dock at Fort Lauderdale. Later Royal Caribbean decided to use the ship in the Mediterranean due to bad cruise sales in the US in 2020 and 2021. But the delays in ship launches made the company change its plans. Now the ship is heading to Florida and is getting ready for its first cruise. And we believe it will be really amazing. Its main destinations are Grand Cayman, Cozumel, St. Maarten, St. Thomas, San Juan, Curacao, Dominican Republic, and many other islands and great places where you always have lots of things to do.