When it comes to the most expensive stadiums, we should remember the SoFi stadium. This is a sports venue in Los Angeles that cost around $6 billion to construct. It was launched in 2020, and now it is one of the most ambitious constructions in the sport that has been successfully finished. The stadium is covered by an ETFE roof and it’s one of the weirdest constructions used for sport and also other events like concerts.

Today we’ll look at what kinds of sports the stadium can be used for, what the actual capacity is, and how it was built. We want to say that the stadium in LA seems to be one of the most beautiful and unusual venues for sport, and that’s why we will only tell you about this place without comparing it to other stadiums as we usually do. 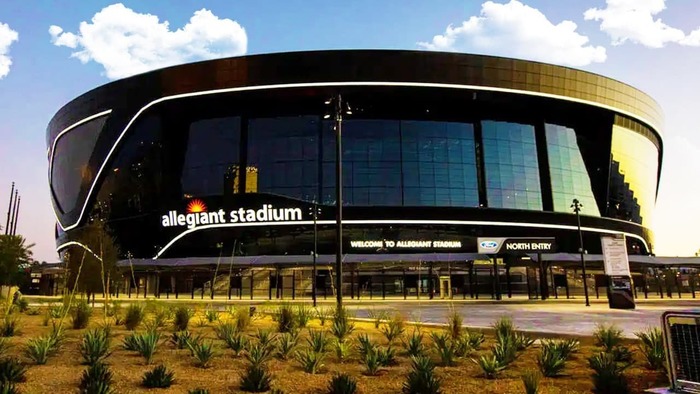 The stadium was designed by HKS. It consists of three main parts that are independent areas: the stadium itself, the pedestrian plaza, and a performance venue. There is a translucent ETFE roof that is supported by a separate set of columns. The roof is fixed and it covers all three independent zones of the complex. The roof is huge, so they decided to project images on it, so the passengers of American and international airlines arriving at LAX can see these images when descending to the airport. It all looks quite futuristic.

The stadium bowl has open sides which is quite unusual for such a construction. The stadium capacity is 70 240 people for NFL matches. The stadium was initially built for NFL and it’s home for Los Angeles Rams and Los Angeles Chargers. It also hosts matches of the LA Bowl team. But football isn’t going to be the only kind of sport this stadium can be used for. So the capacity for other types of events can be increased to whopping 100 000 plus spectators.

Also, the performance area which is called the YouTube Theater has 6000 places and is a separate unit under the same roof. The estimated price of the whole project is 5 to 6 billion dollars which makes SoFi one of the most expensive stadiums in the world.

The Oculus – something you’ve never seen

One of the special parts of the SoFi stadium is the Oculus. It’s a huge ovular double-sided 4K video board that is suspended on the roof. This is an 80-million-pixel screen that also has 260-speaker audio system inside and a 5G antenna to give access to the internet.

The Oculus is the largest screen ever installed on sports stadiums and it’s widely used for both sports matches and concerts. The construction weighs around 2.2 million pounds and it looks so crazy that you can’t even figure out how it manages to hang there on the roof. This is probably the most expensive screen ever used in sports stadiums.

How are they planning to use the stadium?

Well, it was originally built for NFL. And it’s now mainly used to host matches of two well-known Los Angeles NFL teams. But you can’t expect the $6 billion sports venue to make money just by hosting the NFL matches and being empty 5 days a week.

Of course, the second way to use the stadium is music concerts. There haven’t been many of them so far, but the stadium has quite a big plan for music events. Over 100 000 spectators can come and listen to live music, so it’s going to form the main revenue for the stadium owners.

Also, they built the SoFi stadium for WrestleMania and WWE fights. In April 2023 the first WrestleMania event is going to be held here.

One more way to use the stadium is to host different kinds of athletics competitions, and one of the major events will be the 2028 Summer Olympics. SoFi will host the opening and closing ceremony as well as soccer matches and archery. Over 100 000 people can come to the stadium during the Summer Olympics.

Also, there is a bid for FIFA 2026 world cup matches in LA, and SoFi is the main reason to bid. The stadium can host soccer matches with higher capacity than NFL games.

Who gave $6 billion to build SoFi?

The owners are seeking tax breaks from Inglewood to cover some part of the expenses, but the additional tax hasn’t been arranged yet. Given the final costs were much higher than $5 billion, the SoFi stadium is the most expensive sports venue ever built in the world.

It’s quite interesting that Inglewood, the city with population of 109 000 people, can get all its citizens into the SoFi stadium. And it’s even more interesting that there is another sports arena just near SoFi – The Forum. Los Angeles itself has a couple of other great stadiums, so the choice for the citizens of Inglewood is just amazing.

Of course, there will be additional options for transportation from LA to SoFi. They now discuss the opportunity to build an automated people mover that will connect SoFi with the LA city lines of subway and other transport types.