Brittney Griner is the WNBA star who plays for Phoenix Mercury and often leads her team to the win. She’s one of the tallest players in the league towering at 6 feet 8 inches or 2.06 meters. Brittney is well-known among basketball fans for being able to dunk. You may know that WNBA games are less attended than NBA matches because they aren’t so spectacular. And the fans usually say that they love seeing people dunk, and that’s why they love basketball. Inability to dunk is the reason why women's basketball isn’t that popular in the whole world.
But Brittney Griner doesn’t care about average statistics. She loves basketball and she loves showing the wonderful game. That is why in all her previous teams she always was the most loved player by fans. Today we’ll tell you some great facts about Brittney that you might have missed from her career and life. 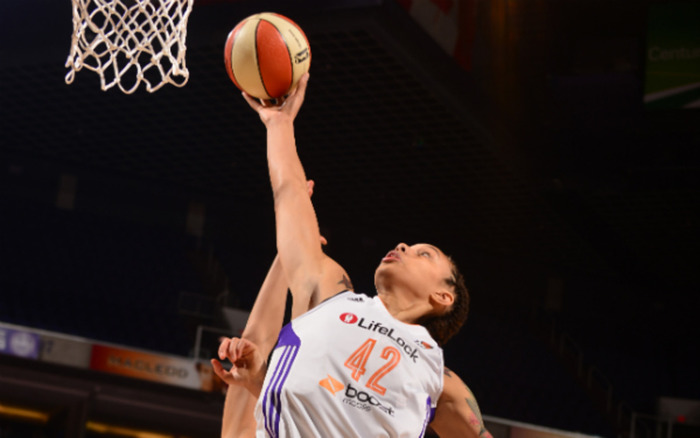 How did she learn to dunk?

In her high school, Griner played basketball with boys and she wanted to show the same spectacular game. But women’s legs are usually not as strong as men’s, so women basketball players can only dunk when they are extremely tall. And still, jumping high for a very tall girl isn’t that safe – she can get knee injury easily. Griner didn’t care much about what her trainer was saying about the risks, and she started additionally attending football training to strengthen her legs. In high school, she became extremely popular in the US for her dunks.
The first video with her dunks in high school basketball games and in training got nearly 3 million views and that helped her get her way to professional basketball. Shaquille O’Neal even gave her a visit after all the hype about a dunking girl. During her senior year, she dunked 52 times in 32 games and set a unique record that no one can beat until now.

Griner player for Baylor University during her college years and she became the superstar of college basketball in the US. In addition to dunks, she started blocking opponents’ shots and led her team to wins. She is still one of the most efficient shot blockers in the history of women's basketball.

Her best result in the college basketball games is 40 points a game with an average of 23 points a game in her sophomore year. She also made around 10 rebounds and 5 blocks a game.

In 2012 Brittney had good chances to play for the US women's Olympic basketball team, but at the last moment, she decided to withdraw her candidacy for having more time in the championship. That was a wise decision for her future career because in 2013 Phoenix Mercury selected her as the first pick during the WNBA draft.

After that, she started showing wonderful defense power averaging 3 blocks per game and improving this figure to 4 blocks next year. During her first game against Chicago Sky, Griner made two dunks becoming the second woman in the WNBA history to achieve that result. Candace Parker was the first to dunk in WNBA official matches.

She has taken part in all WNBA All-Star-Games but 2013 one. In her first All-Star game, she missed due to a knee injury. In 2020 Griner had to miss half of the WNBA season due to personal issues.

At the summer Olympics in 2016, Brittney Griner became a gold medalist with the US women's basketball team.
During her off-seasons, Brittney Griner plays overseas. That’s a very popular way for American star players to earn money. Griner played in China and in Russia for UMMC Ekaterinburg, and those contracts have made her much more money than all her years in Phoenix Mercury.

In 2013 Brittney Griner officially came out as a lesbian. She said in her interviews that she had been bullied all the way in her school and college for being different. For being big and having a different sexuality. But she tried hard and converted these differences to her advantage. Now she is one of the most popular basketball players in the US among women.

She also said that her father didn’t take her coming out positively which made her suffer more. For now, she fights for the rights of LGBT society and says that she’s trying to make it at least a little easier for the next generations.

Griner was married to her WNBA fellow player, Glory Johnson. But they divorced in 2016. Unfortunately, we know nothing about her private life now, and she tries to keep it in secret.

Some basketball fans still think that Brittney Griner is a man. But that’s not true, she’s always been a woman and she showed all her documents numerous times. Otherwise, she just couldn’t take part in the 2016 Olympics in a women's basketball team.

Salary and net worth

Also, she signs endorsement contracts with sports brands. One of the most popular brands is Nike, and we believe it brings her millions a year. The interesting thing is that she became the first official lesbian who signed a contract with Nike. This brings her to an official net worth of $3 million.