Qatar is obviously not the strongest soccer nation in the world. But now all the soccer fans around the globe want to know more about the country because many of them are going to visit it in 2022. FIFA World Cup is going to be held soon in Doha, and this is a good reason to look at Qatar football stadiums that will be the venues for the World Cup.

There will be 8 stadiums used in the final part of the championship. The majority of them were built or renovated to fit for the world’s main soccer event. And now all of these stadiums look just amazing. We want to give a quick overview of the venues that will host matches of FIFA 2022 in Qatar. 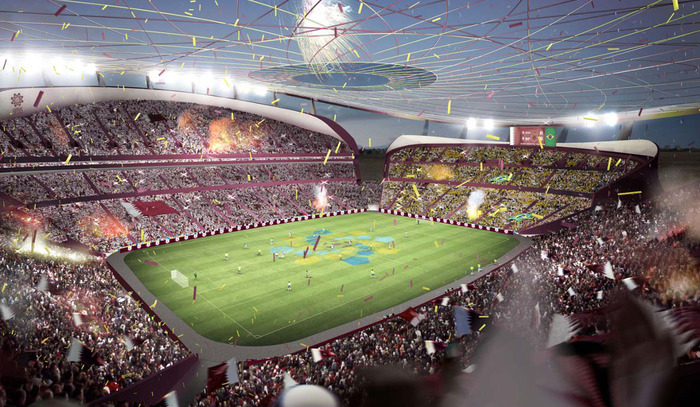 This is the main stadium of Qatar that is still in the process of construction. It’s going to open soon in the city of Lusail, one of the first planned from scratch cities in the world. This is a new venue north of Doha that is going to invite up to 80 000 people for soccer matches. The stadium is beautiful and technological. The venue will host the opening and final matches as well as other games with the biggest expected number of fans. This is also the biggest football stadium in Qatar.

Interestingly, Qatar invests $45 billion to build Lusail City from scratch to host football fans. And this investment seems insane if you think about the future of the venue. Are they still going to use the city and the stadium to get at least the part of this money back?

The new stadium which is located in Al-Khor is called Al-Bayt stadium. With the capacity of 60 000 fans, this is the second biggest stadium to host FIFA 2022 World Cup matches. They are going to use the stadium for local football events and other sports competitions after the World Cup. But for this, they are going to reduce the number of seats to 32 000 and donate the seats to other countries. The excessive space will be used to build a luxurious hotel, restaurants, a shopping mall, and other commercial units.

This is one of the oldest football venues in Qatar that is situated in Doha. Up to 48 000 people will be able to watch football matches during the World Cup here. The stadium was built in 1975 and has been the home of the Qatar national football team.

The last redevelopment happened in 2017, so the stadium wasn’t changed for FIFA World Cup. It’s the first finished venue of the final part that will host quite a lot of matches. The best thing about this stadium is the location within the city, so fans will be able to easily commute to and from the venue on the days of matches.

Although, there were plans to renovate the Khalifa Stadium in Doha to add 20 000 seats. But for now, we see that there are no construction works on the stadium.

This is another stadium situated right in Doha city. This is a brand-new stadium that is being built especially for the FIFA World Cup matches. The venue is nearly completed and it even hosted the first matches in the Qatar football league in 2020. Now only some construction works around the stadium are in progress.

The stadium is located between the campuses of one of Doha’s universities, so it will be used as the venue for student sport events. After the World Cup, they will reduce the number of seats to 25 000 and will allow universities of the city to use the stadium for training and games.

Like all stadiums in Qatar, this one has an unusual design. It looks like a diamond and it actually seems quite compact.

This stadium was formerly known as Al-Wakrah, and it is one of the most beautiful venues of the 2022 FIFA World Cup. The stadium is being built in Al-Wakrah, it was designed by Zaha Hadid, one of the most famous architects in the world. The appearance of the roof was inspired by traditional sailing boats that were used by pearl divers.

After the World Cup, the stadium will retain 20 000 seats and will be the home of the local soccer team.

The stadium in Al-Rayyan is going to host quite a lot of matches during FIFA World Cup. It was built in 2003 and it’s now being reconstructed to meet the requirements of FIFA competitions. Basically, they demolished the old stadium and are now building the new one. Interestingly, more than 90% of materials left after demolishing the old stadium are being reused in the building of the new venue.

This stadium is being built in the port of Doha, that’s why it’s often called Doha Port Stadium. Its design is a complete surprise. It looks like a huge pile of shipping containers. What’s even more interesting about this venue, it will be completely dismantled after the World Cup. So they just build the stadium to invite 40 000 fans to 6 or 7 matches and then to take it apart.

This stadium is being built near Hamad International Airport. It’s going to invite up to 40 000 people to watch FIFA World Cup matches in 2022. After the event, the stadium will retain 20 000 seats and will be used for a local football championship and for other events.

As you see, Qatar is building 7 new stadiums for the World Cup, and they are investing billions in the projects. It makes it worth buying a ticket to Qatar Airlines and visiting Doha in 2022!