Basketball stars in the US are really well-known and well-paid, they are the famous people of sports and they are the role models for society. But if we look at women's basketball, it isn’t that popular and promising for players. And still, we know some great sportspeople from WNBA and college leagues who can show you what real basketball is along with being very beautiful.

Today we’ll tell you about two of the best women basketball players from entirely different worlds, in our opinion. The first is Liz Cambage, the Las Vegas Aces player who is widely known for her big height and great stats on the court. The second is Paige Bueckers – the rising star of college basketball who plays now for UConn and is going to be the next WNBA star in the future as soon as she is eligible to take part in drafts. 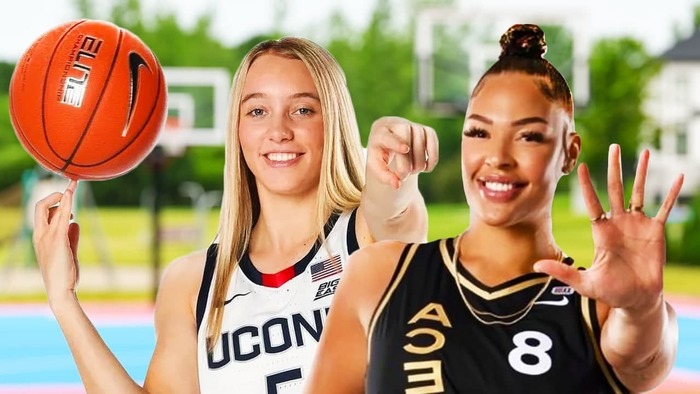 We decided to compare Paige and Liz in terms of their lifestyles, salaries, hobbies, and families.

Paige Bueckers and her attitude to life

This girl is the most promising athlete in US women's basketball. She may take part in international competitions for the national team sooner than she’ll be able to be hired by any WNBA club. She’s really young and absolutely talented.

Paige has been playing basketball since childhood. She was born in 2001. Her first career success came with Hopkins high school basketball team. The world started talking about Paige in 2019 when she started playing for Uconn in US college basketball.

This girl is not as tall as you might think. She’s only 5 feet 11 inches. Ok, by saying ‘only’ we mean she is not that tall for the basketball court, but for an average girl, she is quite tall.

The most impressive talent of this young girl is her ability to control the ball. She is doing some magic by showing the marvelous game and leading her team to wins. Uconn’s fans love watching games when Bueckers is on the court. She has her own manner of playing basketball and this will obviously be her main feature in her WNBA career.

Average 22.3 points per game make her one of the most prospective players in American college basketball, at least among women. She’s also extremely active in making assists and rebounds. For now, she has dozens of accomplishments and prizes for being the best player in her league.

Liz Cambage – how is she different?

Liz was born in 1991, so she is 10 years older than Paige. She started her professional career in the US in 2011 and then she had a lot of changes. She played many seasons in China, then went back to her native Australia to return to the US and play for Las Vegas Aces since 2019. She’s become Aces’ star, fans love her for being always active, showing quite good stats.

The most interesting thing is that Liz Cambage is 6 feet 8 inches tall, and that’s nearly 1 foot taller than Paige Bueckers. The incredible difference, given Paige, isn’t the shortest girl in college basketball. So we think that for Paige it will be quite hard to play against any team with Liz Cambage leading it. The trouble is that your height decides everything in basketball, taller players easily block the shots of shorter ones.

In Las Vegas Aces she shows 15 to 16 points per game on average. That’s not her best result, and that is much worse than Paige shows in her college games. But Aces use Cambage for blocking shots, and that’s quite wise given her height.

Liz isn’t determined whether she wants to continue her career in the US. She has said that she didn’t like the limitation of salaries that WNBA players get from their clubs. Now Liz Cambage and other top players of WNBA fight for even rights for men and women in professional basketball. We don’t know the position of Paige Bueckers, but we can say for sure that she dreams about getting to the WNBA league.

Hobbies, salaries and other issues

There isn’t much information on the hobbies of Liz Cambage, but she said once that she was obsessed with cathedral architecture. She also noted that she wasn’t that religious, she just felt a kind of respect for this type of architecture.

Paige Bueckers now has no time for hobbies. She studies and tries to keep up with the quick path of her training to stay active and demanded up until the WNBA draft.

Regarding salaries, Liz Cambage is one of the top-rated players in the WNBA and she gets the maximum possible salary for this league. It’s still not a lot of money – a little over $220 000 a year. But she makes more money with endorsement deals and as a social media influencer.

Paige Bueckers doesn’t earn much from basketball now. She earns some money as a college scholarship for talented sportspeople, but it’s not that big money. And still, Paige is a very active social media person, and she may earn thousands a month just by selling ads in her Instagram stories and posts. Paige only starts her way to the top right now, so money isn’t the most important thing for her.

Officially, Paige and Liz have never met. But we believe young and talented Bueckers would love to have a chat with the experienced top-rated player to understand what way she should go in her career in the nearest future.