Candace Parker has always been the key player in her team. This woman has been creating the history of the WNBA and has been one of the most famous players. Today we are going to tell you about her life, career, prospects and even about her salary.

Candace Parker was born in 1986 and she is still an active player appearing on the court nearly any time her team plays. She’s one of the key players in the Chicago Sky of WNBA, and she is the living legend of the Los Angeles Sparks. She mainly plays on forward and center positions. Being 6 feet 4 inches tall, she is one of the tallest currently active players in WNBA, and we adore her for the style of controlling the ball, scoring 3-point shots, and motivating her team. 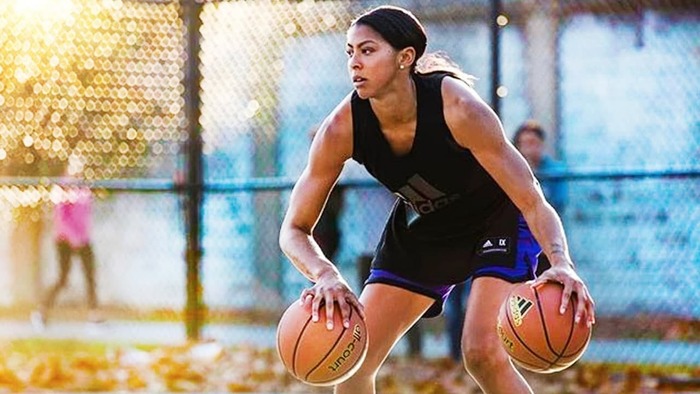 Yes, there are rumors about her soon retirement. You aren’t supposed to compete with young talents when you are over 35 even if you have 13 years of professional experience. Let’s find out more about this wonderful player.

Candace Parker was born into an athletic family. She has two brothers, and one of them is a former NBA player, Anthony Parker. So one can think that basketball is in their blood. It all started with her father, Larry, who played basketball in his college years and gave this love for the sport to his children. Candace was worried that she could never achieve the same success as her father and brother did. So, she decided to take up soccer. It was until the 8th grade that she was playing soccer and only dreamt of being a basketball player. But after that, her family convinced Candace to start achieving the dream.

During her high-school years, she showed wonderful results in the basketball team of Naperville Central High School in Illinois. She showed an average of 22.9 points a game and made 13.2 rebounds a game.
Candace Parker is also believed to be the first woman in Illinois basketball who dunked. It was in 2001 when she was a 15-year girl. Later on, she became the first woman to win the dunk contest at McDonald’s All-American Game.

In 2004 Candace entered the University of Tennessee, but her first year wasn’t that successful due to a knee injury and surgery that she had to undergo. Starting with the 2005-2006 season, she showed wonderful results in college basketball and experts started saying that she was the next WNBA star.

Candace Parker was the only college player in the US National Team for the 2006 FIBA World Championship and she won the bronze medal with her team that year.

Candace was selected as the first pick in the 2008 WNBA Draft by Los Angeles Sparks. She started playing with legendary Lisa Leslie. Later on, her team-mate from college basketball, Shannon Bobbit, joined the Sparks, too. Shannon is known to be the shortest player of WNBA, by the way.

In her debut game for Sparks, Candace Parker scored 34 points and made 12 rebounds. Also, Candace kept on making spectacular dunks. She is still one of few WNBA players who actually made dunks during the regular championship.

In 2008 Candace Parker became the Olympic Champion winning her first gold medal with the US national team. She scored 14 points in the final game and actually appeared in all games at the Olympics.

Candace is known to be a hot-headed player. She once was involved in a huge brawl on the court.
In 2009 Candace Parker gave birth to her daughter, Lailaa Nicole Williams, and she had to miss nearly all the

season. Then, in 2010 she got a bad shoulder injury and had to sit out for the whole season again.
Then, up to 2019 Candace Parker was showing the great game and regularly took part in WNBA All-Star games. She became the real symbol of Sparks by bringing them to wins hundreds of times after showing incredible results. And that’s why Candace Parker was named the most beloved sports person in Sparks’ history. The fans of the team were always anxious to meet her and have her autographs on shirts and posters.

In 2021 the things changed. Candace Parker got the status of unrestricted free agent and decided to end her 13-year-long career in Sparks. She chose to relocate to Chicago and signed a 2-year contract with the Chicago Sky of East Conference of WNBA. She’s now glad to play closer to her original home. She says that she’s really happy to continue her career in the place where she was brought up and where she first felt her love for the orange ball.

The overseas career of Parker

Not many people know that during her off-seasons in 2010-2015, Candace Parker played for UMMC Ekaterinburg in the Russian League. In 2016 she also played in China, and in 2017 she had a chance to play for two months in Istanbul, Turkey to then return to China again. Off-season time is a good chance for WNBA players to earn some money overseas and get some more experience. And Candace never lost her chance.

Did you know that in 2007 People magazine included Candace Parker in their list of 100 most beautiful people? And we have to admit that she really is one of the most beautiful players in the WNBA.

In 2008 Candace married Shelden Williams, the college basketball player who now works as a coach in his former team. The couple had their child in 2009, but in 2016 they split up. There isn’t much information about why it happened, but we only know that they keep bringing up their daughter together sharing the duties.

In 2020 we got to know that Candace and her daughter became co-owners of the future soccer club in the National Women’s Soccer League that will start playing in 2022. The team is Angel City FC.

Also, Candace and her daughter now have a dog called Prada. They love animals but agree that they have little time to spend at home with them.

Now Candace is also a studio analyst for CBS Sports. Unfortunately, we don’t know much about her private life, she avoids answering these questions during interviews and only says that she’s happy living with her daughter and the dog.

How much does Candace Parker earn?

Her salary in the last 5 years of her Los Angeles Sparks career averaged $115 000 a year. And you may know that the average WNBA salary is slightly bigger than $70 000 a year. Chicago Sky offered a $190 000 contract in 2021 and $195 000 in 2022. That’s more than twice bigger than the average in the League, so even being a 35-year-old athlete, Candace keeps getting quite big salaries. She is thought to be the highest-earning WNBA player currently.

But you will be surprised to know that her net worth is now estimated to be $5 million. Were the estimates wrong? No, the thing is that star players in WNBA usually spend their time during the off-season to play in other countries, and there they can make much more money. In Russia, Candace Parker earned over $1.3 million a year and she was playing like a star player in her team.

Another $3 million a year she makes having the contracts with sports brands and businesses that pay her for advertisement.

Her Instagram account has more than 750 000 followers and it can be one more source of income. You can see ad posts there and then among her publications, and that means she can earn another 1 to 2 million dollars a year selling ad places among her stories and posts.

Candace Parker is one of the most prominent players in WNBA history. And we are glad that she decided to keep playing and signed a 2-year contract with Chicago Sky. We believe she can still show great stats and a spectacular game.