If you are into sailing, you may have heard about SailGP. This is an international competition using high-performance catamarans. The competition was first held in 2019 and became a huge breakthrough in sailing. You will never believe what kind of speeds these boats actually show during races! F50 Catamaran is actually a Formula-1 among yachts. It’s extremely expensive to build and really hard to steer, but the competition still gathers hundreds of yachtsmen all over the world.

SailGP has numerous Grand Prix races all around the globe. Winners are determined in a lot of spectacular races with a big number of fatal crashes, unexpected weather conditions. The F50 boats developers do their best to improve the yachts’ efficiency and make their speeds even faster. Today we are going to have a look at SailGP yachts, F50 Catamarans. And that’s going to be really exciting. 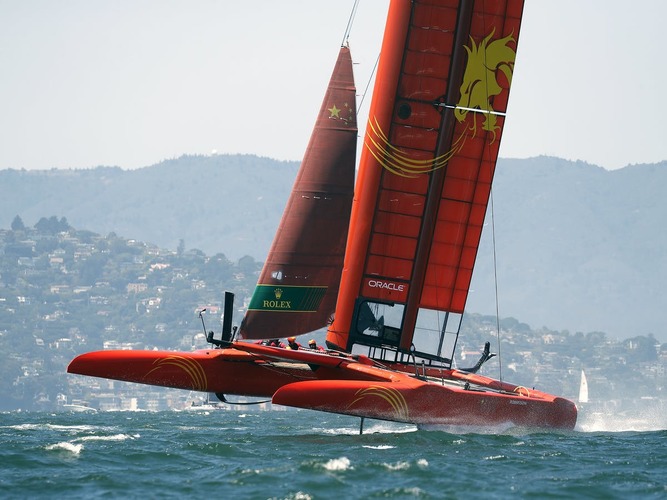 Is it a bird, is it a plane? Nope, it’s an F50 sailboat – but yes, it does have wings! The flying F50s may not resemble any other boat you’ve seen before due to the cutting-edge foiling technology that allows the boats to lift out of the water and achieve such mind-bending speeds.

Foils work in a similar way to aircraft wings. In simple terms, they create a lift force that works against gravity, raising the boat out of the water, which reduces drag and allows sailors to reach even faster speeds!

Designed with cutting-edge technology and craftsmanship, these F50 boats are strictly one-design and identical – that means that every team lining up on the SailGP start line has exactly the same equipment, with the only difference in performance coming from the skill, teamwork, and strategy of the athletes on board.

There are dozens of teams worldwide that work hard to produce new technologies for the F50 class of vessels. But it’s not like in Formula 1 where they build their car engines for each team and create hidden advantages for pilots. In SailGP every team competes on technically the same boat. And all teams get all the new technologies that are produced by the whole bunch of engineers from the whole world. It means that F50 Catamaran will develop every year and will become faster each time they introduce a new version. That’s a unique example of how you could make technology better and cheaper to develop and also more affordable for everyone.

The best part about F50 Catamarans is that they are the most eco-friendly vessels in the world. They have no motors, they are powered by their hard-working crew and nature. And that adds value to this class of vessels in terms of the current ecological situation.

The F50 speed is just hard to believe

The name F50 comes from a 50-foot size. It’s exactly the length of the catamaran. The F50 foils using rudders with elevators, and two L-shaped daggerboards. The crew controls the angle of attack of both to achieve flat, fast, and stable flight. When it goes close to top speed you see the two hulls just flying over the water surface. Three elements touch the water: two rudders and the foil. This allows the boat to achieve mind-bending speeds. The top speed is estimated at 52 knots that is close to 60 mph! Can you imagine that?

The standard wing height is 24 meters or 78.7 feet. And yeah, that’s really hard to manage when the wind is quite strong. To get this thing go at high speed you’ll need 5 crew members, each of them has to do the job correctly and professionally. One step aside and you are flying to hit the water at the speed of 60 mph which can be deadly dangerous for a person.

The special shape of the wing allows the boats to compete in a wider range of weather conditions. The storm is not the excuse for canceling the Grand Prix. The maximum speed of 52 knots was achieved numerous times in competitions when the weather conditions allowed crew members to use the technology to the full.

Every crew member is a key link in the chain

There are 5 crew members to maintain the fast sailing at F50 Catamaran. Take one crew out and you’ll never get it to sail even at 20-30 knots and be safe for people. One person is in charge of the helm or wheel. He decides what direction to put the yacht in. The task is extremely difficult because once the wrong direction is chosen, the catamaran falls on the surface and loses speed. To ensure the vessel flies above the water, it’s vitally important to steer it correctly.

Then there is one flight controller. This is the crew member that is needed for controlling the height of the flight. So this person decides whether it’s rational to fly at the current height or to lower the vessel down to give it more speed. The flight height depends on the weather conditions. It’s important that the waves couldn’t touch the hull bottom, otherwise, the speed will be too slow.

There is one wing trimmer on the boat. This person controls the wing. Once he does something wrong like watching the seagulls, for example, the boat may turn over or simply lose speed. The attack angle is vitally important for maintaining a flat flight. And here the wing trimmer is one of the most important crew members. His job is probably the most active one if you look at how the crew works.

Finally, there are two grinders. They control the winches that move the boom and raise the wing if needed. The grinders at modern F50 catamarans are like tourists because they no longer need to use those manual winches. Now the boats are equipped with electric ones and they are powered by a lithium-ion battery installed in one of the hulls. So they just press the buttons. But again, once they press the wrong button, all the race is spoilt.

Future is even more optimistic

F50 Catamaran race is a very spectacular thing and many people now join the show. It costs 8 to 10 million dollars to build a catamaran of the class, and most teams have a backup just in case. But it’s quite the same as producing a Formula-1 car and taking part in competitions worldwide. So more teams join the competition each year. The race and the vessel class itself are very new. We may expect that in 10 years these boats will fly over the water without touching its surface at all and will speed up to 80-100 knots.

This is possible because all the teams work with the construction of the catamaran all the time and share their new inventions with other teams. This collective work leads to major changes for each season of the competition. And that is why the F50 Catamaran is going to be even greater in some years.

We have no idea what else can you add to a wind-powered vessel that can fly at the speed of 60 mph. But we are sure there are many things that engineers can come up with.

Many people ask if it’s possible to test drive the F50 Catamaran. That’s possible if you have a lot of money. As we said before, the average price of the vessel is 8 to 10 million dollars. If you want to be a wing trimmer which is the most desired position for those who want to feel all the speed and danger, you’ll need to train for a couple of months. And then you’ll have all the chances to send the catamaran to the very bottom of the sea just by making one bad move. So, it will be much cheaper to watch the SailGP race on your TV. But we are sure that between the seasons the teams can provide test drives if you are ready to pay a lot and learn fast.