The Intuit Dom Arena is something Los Angeles and mainly Inglewood basketball fans have been waiting for for quite a long time. The stadium has been discussed for years, and the investors should have met the requirements of Inglewood authorities, climate activists, NBA commissions, and the Clippers team. But finally, the project starts, and we are looking forward to seeing it ready.

The design of the new arena has been discussed for years. The stadium will be a privately built venue that will cost approximately $1.8 billion. Why approximately? Because we have never seen a stadium of this kind built within the initial budget. So, by spending this money, the future owners want everything to be just perfect. They have discussed every inch of legroom between seats, they have changed the cupholder location on every seat just to make the venue absolutely comfortable for every fan and every player. The venue is going to have 18 000 seats. 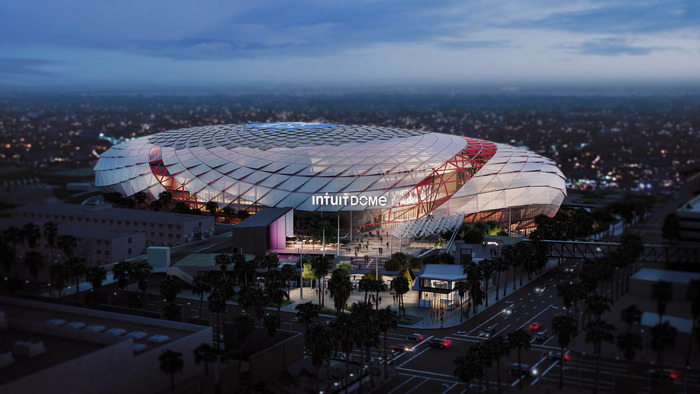 The stadium is going to be funded by Steve Ballmer, the owner of the Clippers, and by the NBA club itself. Ballmer said that this arena will be like no other venue in NBA. It will be a kind of basketball Mecca, basketball palazzo, the place where people will be able to enjoy the game and the players will show great results.

The main thing in the future arena is that every single thing has a purpose. The bathrooms are designed in a way that will help get the fans to their seats as soon as possible. The huge halo screen will hover over the court and will show the best moments of each game and also entertain fans. The screen is going to have 44 000 square feet of LED lighting, and it will be one of the largest screens on NBA stadiums in the US.

Currently, the Clippers play in Staples Center. They share the venue with Los Angeles Lakers and with NHL’s Los Angeles Kings. This brings to changes in plans because the venue is super busy and is sometimes not ready to host the matches. So Ballmer has been talking about the home arena for the Clippers since 2019. Finally, the groundbreaking ceremony was held, and the stadium will be ready in 2024.

The Clippers’ managers say that when deciding on any point about the new arena, they needed to answer a couple of hard questions. For example, when the project was made, the designers often asked if the investors want the arena to be good for sponsors, music concerts, or basketball fans. In the end, the answer always was ‘for basketball fans', and this is what the new arena is all about. It will be built to become the most comfortable and well-planned venue in American basketball. Well, at least this is what they say.

One example of how they changed the way the conventional NBA stadiums work is the food in the arena. Any fan will be able to just leave his or her seat, go to a concession stand and just grab a preferred drink or some food. Then the fan will just go back to the seat and enjoy the match. No need to spend time in lines, lose precious time for paying – the fan’s account will be charged automatically. This is something like grabbing a snack from your fridge when you are watching the Clippers’ game at home on your couch.

The Intuit Dome arena is going to offer the largest legroom among all NBA stadiums. Well, at least, it will be larger than average. Ballmer claims that they treated like the upper bowl like the lower bowl. The legroom and seats will be the same throughout the stadium so that nobody could get a bad seat no matter what kind of ticket the fan buys.

One of the things that makes Ballmer proud is called The Wall. This will be a big area with 4 700 seats and a standing zone in the middle of it. The Wall will be located right behind the bench of the opponent teams. Designers even hired acoustic experts to ensure that the sound from The Wall will be unbelievably loud.

Although there are people who are sure that $1.8 billion could be spent in a more sensible way nowadays, the Clippers fans would agree with Steve Ballmer’s idea that the best way to spend this money is to build a new home for their favorite team.

Steve Ballmer’s net worth is estimated at $100 billion, so he can afford to build the new venue to watch the basketball games of his favorite team together with 18 000 of his closest friends.